Having been involved in the participation and coaching of our interval sessions this week I thought I would feedback on some of my TP data to help you begin to look at and to understand yours. I will just give you some of my stats/figures as background and then talk you through the 2 sessions highlighted below.

Results show that I have a good threshold number (340w) and power to weight ratio (4.6w/kg) but they also show that I generate quite a lot of that power anaerobically (2000joules if you’re interested!). Not necessarily a bad thing, but continually relying upon the generation of power in this way may well blunt the aerobic system responses that I want to elicit through my training for triathlon.

I had the great joy of doing this interval session twice this week; below we have the Training Peaks data from the 2 rides with a summary of the results.

My thoughts Pre-ride – to build from 3-4 reps in and possibly finish near 400w.

The graph shows the prep set of 3 15 second efforts and then the 7 intervals are highlighted. You can immediately see that the pink power line is constant and even, with very little progression or regression from set 1-7. Heart rate (red) rises gradually with each effort and quite steeply so for the first 3 intervals before flattening slightly in the later ones as I get closer to maximum. If you look more closely you can see that there is a heart rate lag during each interval (it takes approx. 30 secs or so for HR to begin to match the increased effort from the legs) and the recoveries never allow HR to come back down even close to the previous level. Lactate threshold HR was first reached in interval 3, with each subsequent interval pushing HR up above this level.

All of these average power scores for the intervals are between 108 & 110% FTP.

Remember here, that it isn’t the actual numbers that are of any concern really, it is their relationship to my 1 hour power (threshold/FTP) that matters. This is how we can compare relative efforts between athletes too. Smaller athletes, those without a cycling background or those newer to the sport may not have numbers as high as this (and indeed Pro triathletes as we’ve seen on the televised Zwift races are pushing even bigger numbers) but if 2 athletes are both working at 105% of FTP then we can conclude that they are putting the same relative effort in.

My initial thoughts straight after the last interval was that there is a huge difference in the ‘feel’ of this session compared to my reference point of the VO2 session. I could not have done another repetition with such short recoveries today! I was also a little disgruntled that I was ‘nowhere’ near my 400w target.

My conclusions were that I cannot expect to push the same amount of power as on the typical VO2 sessions (mentioned earlier). Psychologically I need to accept that I can benefit more from this slightly lower power output with shorter recoveries as it will stress my aerobic system more and hinder my anaerobic system from contributing as much to the energy production.

*I didn’t actually look at or analyse any of the figures above until after session 2 (below)*.

2.Interval Ride – Fri 17th April (led by myself for more fast twitch athletes and with the theme of holding a little back and aiming for the upper end of threshold (Z4) or lower end of VO2 (Z5). Not trying to give maximum effort but to finish with enough energy reserves to be able to do one more rep.

The graph shows the same overall trends with similar figures for both HR and power. I did finish this time, thinking that I could have done one more rep, but this is probably a psychological factor from having done the session once previously rather than through gains in fitness or a change in the intensity level at which I rode.  The breakdown below shows that I didn’t really change anything across the 2 rides. Had I looked through the data beforehand then I would probably have ridden each interval in the range of 350-360w but not over. LT HR was again reached in the 3rd interval.

My conclusion after looking through the comparative data is that I still got carried away and ‘wanted’ to push harder, especially early on. I need to set my appropriate power band ahead of the session and stick to it firmly. The pain and perceived effort will build through the session and I don’t need to be at 100% on effort 1, and that is absolutely fine in order to stimulate the physiological changes that will ultimately make me a better rider.

I hope this has been of some interest and given some further insight into both the science and psychology of our current ‘lockdown’ training goals. Here’s hoping we all come out of this stronger, fitter and above all healthier. Keep well! 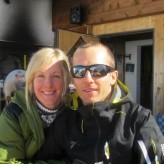